Cary Elwes – As You Wish | Review 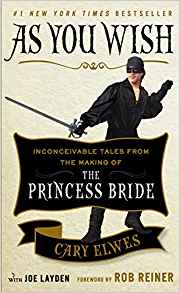 Title: As You Wish Cary Elwes – As You Wish

This was inconceivably good.

True, it might not make much sense to you unless you’re already a fan of The Princess Bride, because this is basically a memoir of the movie’s creation. Written by Cary Elwes, the actor who played Westley, and with support from Joe Layden, who’s written or co-written over thirty New York Times bestsellers, you know you’re in for a treat here.

I particularly enjoyed the fact that each of the actors also contributed to the book, although the way that their comments were inserted was occasionally clunky and/or repetitive. There’s not much point including a quote from Christopher Guest, for example, if he’s just repeating what’s already been said. But overall, it was better for including those comments and so I can’t complain too much.

Granted, I’m only three books into the month so far, but I think this has a decent shot at being my book of the month. The Princess Bride has been a favourite film of mine since I was a kid, and I particularly enjoyed reading about how Elwes and Mandy Patinkin trained up for their epic sword fight. I used to watch that fight over and over again, rewinding our VHS copy so many times that it ended up ruining the tape and making it unwatchable.

And of course, The Princess Bride itself is based on a cracking book by William Goldman. Read Goldman’s book, watch the film and then read this.